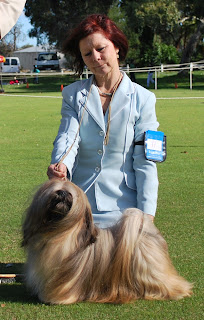 At the Oriental Breeds Society of WA Christmas function and Presentation Night on 12 December, the points score winners for each of the "oriental" breeds was announced.
Well done to Tommy (Kailasa Affair Oth Heart)-Top Lhasa Apso in WA (OBS pointscore)
Posted by Kerrie at 5:35 AM No comments: 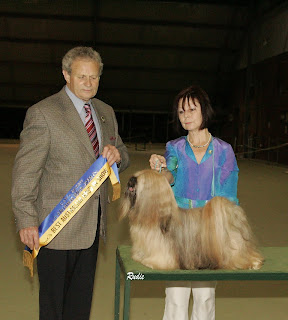 What a hot weekend! With temperatures in the high 30s, it was ice mats and plenty of cold water for the last two shows of the year; one a day show and the other, our favourite-a return to the summer season's night shows.
At the All Breeds Dog Club show on the 12th, Marion Watson awarded Tommy Best State Bred in Group.
At the WA Kennel Club Open Show on 13th December, Tommy went Best In Group under Bob Beattie, then Best in Show under Mrs Lee Parker. It was very hot even though we showed under the pavilion. Thank you Tommy for giving your best.
Then we had the WAKC Championship show. the temperature had dropped and it was such a shame we weren't on the grassed rings. Tommy was Runner Up to Best In Group under Mr Andrew Beattie (WA) then State Bred In Show under Mr Graeme Missen (Victoria)
Now a nice break for the dogs and no more showing in the hot sun until Autumn.
Posted by Kerrie at 5:15 AM No comments: 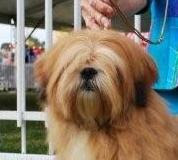 We don't usually travel to a lot of shows outside the city but the B&DDC shows are an exception. The two shows at the beginning of December resulted in two CCs to Eevie (Kailasa Wish Upon A Star AI)and a Best Puppy in Group and then Best Puppy In Show for her brother Juha (Kailasa Here Comes The Sun)under Ms K Tosi (Qld) and Mr Ian Rasmussen(Qld) respectively
Posted by Kerrie at 4:53 AM 1 comment:

Tommy Runner Up Best In Group at Wanneroo November 2009 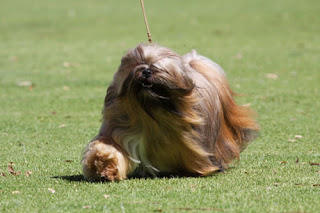 It was a compliment to win Dog CC and Best of Breed under Lhasa Apso breeder, Peter Primrose (WA) at the Wanneroo Agricultural Society Championship dog show run by The West Australian Terrier Club Inc. The day finished for us very nicely with Runner Up to Best Exhibit in Group.
Posted by Kerrie at 9:01 PM No comments:

Back to Back BIS for Tommy at OBS November 2009 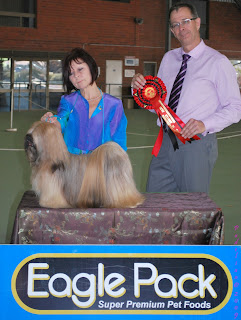 What a fantastic day we had at the Oriental Breeds Society of WA shows on Sunday November 8th . Best in Show at the OBS Open Show, judged by Mrs Lee Parker, went to Tommy (Ch Kailasa Affair Oth Heart). But the day got even better as we exhibited in the Championship show under Andrew Burt (Victoria). Dog CC and BOB went to Tommy with bitch CC to the young Eevie. Then, the ultimate accolade was Best In Show under the same judge.
Posted by Kerrie at 8:36 PM No comments:

Eevie wins Best Of Breed at 6 months of age! 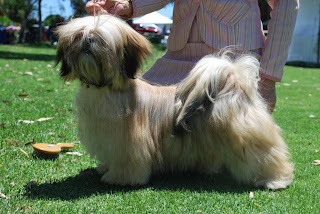 It really was Eevie's show at the All Breeds Dog Club Championship show on the last weekend in October. Still only 6 months of age, Eevie was awarded her second CC, in good competition under Mr Tony Valli (NSW). What a wonderful achievement when our little "Star" went one better and was also Best of Breed.
Posted by Kerrie at 8:26 PM No comments: 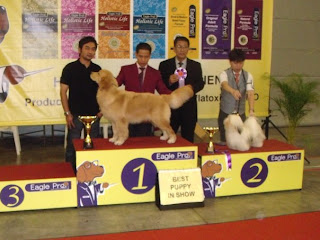 It was a very emotional farewell to my lovely little guy Edmund-Kailasa The Cloud Walker who took a flight to Singapore to stay with my good friend, Stanley Shen (Egoiste Lhasa Apsos). Edmund arrived in Singapore late Friday and by Sunday was at three international shows being awarded three Best of Breeds under Frank Waring, (Australia) Masamitsu Fukushima, (Japan) and Sae-Hyun An(Korea) . He was also 3rd in Group and Reserve Puppy in Show (All-Breeds) under Mr Fukushima.
Well done and what a surprise! I thought he was only going to the show to see what it was like.
Posted by Kerrie at 5:13 AM No comments:

Labels: Stan and Edmund at the show in Singapore.

Eevie wins CC and two Class In Group at B&DDC 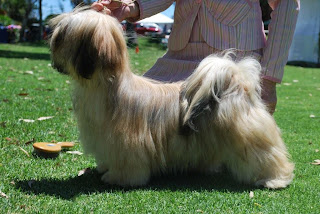 In October we went to two shows at Bunbury where it was a great weekend for Eevie (Kailasa Wish Upon A Star) winning class in group on both days and bitch CC, at just six months of age, under Ms Bev Daines (NSW)
Posted by Kerrie at 4:59 AM No comments: 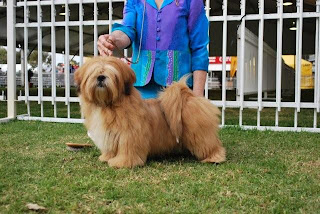 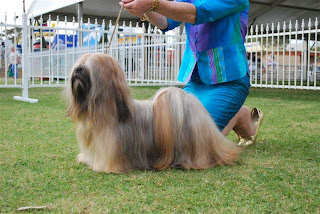 We had a good year in breed judging at the Perth Royal Show with first places in all classes: Breed Judge-Horst Kliebenstein (Germany)
Baby Dog:
First to Kailasa Here Comes The Sun (AI)-Juha
State Bred Dog:
First to Ch Kailasa Affair Oth Heart - Tommy
Baby Bitch:
First to Kailasa Wish Upon A Star (AI)-Eevie
Intermediate Bitch:
First to Ch Kailasa In A Heartbeat-Lola
Dog CC and BOB to Tommy
Reserve CC Bitch to Lola
Best Baby in Breed to Juha.
Posted by Kerrie at 4:47 AM No comments: